This is Highly Recommend, a column dedicated to what people in the food industry are obsessed with about eating, drinking, and buying right now.

My favorite thing about the Long Island Bar is the fried cheese curd that comes with one side of the ranch. My second, third and fourth favorite things at the Long Island Bar are eavesdropping on the light an inch away from me, the glow of the neon “No Dancing” sign reflecting on the terrazzo floor, and the smell of cracked ice and sticky whiskey. I can have the cheese curds outside at a patio table. Incidentally, while my personal comfort zone for pandemics is expanding rapidly, I’m not entirely ready to go back to my favorite cocktail bar – one that is dimly lit, full of strangers, and hygge like a cozy den.

Oddfellows’ Boozy Capsule is no substitute for the bars I love and miss most, but it’s a balm of a different kind: ice cream. This limited series of pints pays homage to some of the best bars in the world – Mexico City Limantour, Barcelona’s Two Schmucks, Sydney’s Maybe Sammy and New York’s Death & Co, Attaboy and Long Island Bar. The Buko Gimlet aroma of Death & Co, the Pastel green of a mint after dinner, is a coconut cream sorbet, which is mixed with pandan leaf, gin and Novo Fogo Cachaça. Maybe Sammy’s La Finca ice cream with Oloroso sherry, Mr. Black Coffee Liqueur and sticky nuggets of Manuka honey tastes like a frozen version of the best Vietnamese coffee I’ve ever had. The Long Island Bar’s pint is a hot, juicy riff on a Cosmopolitan that was developed by the bar’s owner, Toby Cecchini, while working at the legendary Odeon. It tastes like pink lemonade and 2002.

The sweet imagination makes these pints recommendable, but what makes them highly recommended is the quality of the ice cream itself. Oddfellows, one of my favorite scoop shops in New York, is owned by Sam Mason, the former pastry chef at WD-50. He has been making flavors in small quantities such as miso cherry and pistachio cardamom caramel since 2013, and it is even worth putting up bacon, egg and cheese ice cream in his hands. At $ 120 for six pints (including shipping), these are definitely a boon. But think of each pint as a couple of cocktails – and they’re essentially ice-cream – and remember, you don’t have to tip. In addition, Oddfellows donates 10 percent of the proceeds from the Boozy capsule to Another Round Another Rally, a non-profit organization that helps those in the hospitality industry. May I suggest sending your best bar crawl buddy a pack for her birthday?

The ice cream in the Boozy capsule does contain alcohol, but a subtle amount – below 5 percent ABV, which is not so much that it gets near the frozen edges area, but enough that it can be scooped straight out of the freezer. If you’re feeling grumpy, you might be able to top a bowl of Attaboys penicillin ice cream with a dash of peaty scotch, or float a scoop of Cosmopolitan in a glass of Cremant. Or do what I do – dim the lights, turn on a little background noise, sneak up close to your partner, roommate or dog and stick a spoon straight into the beer. 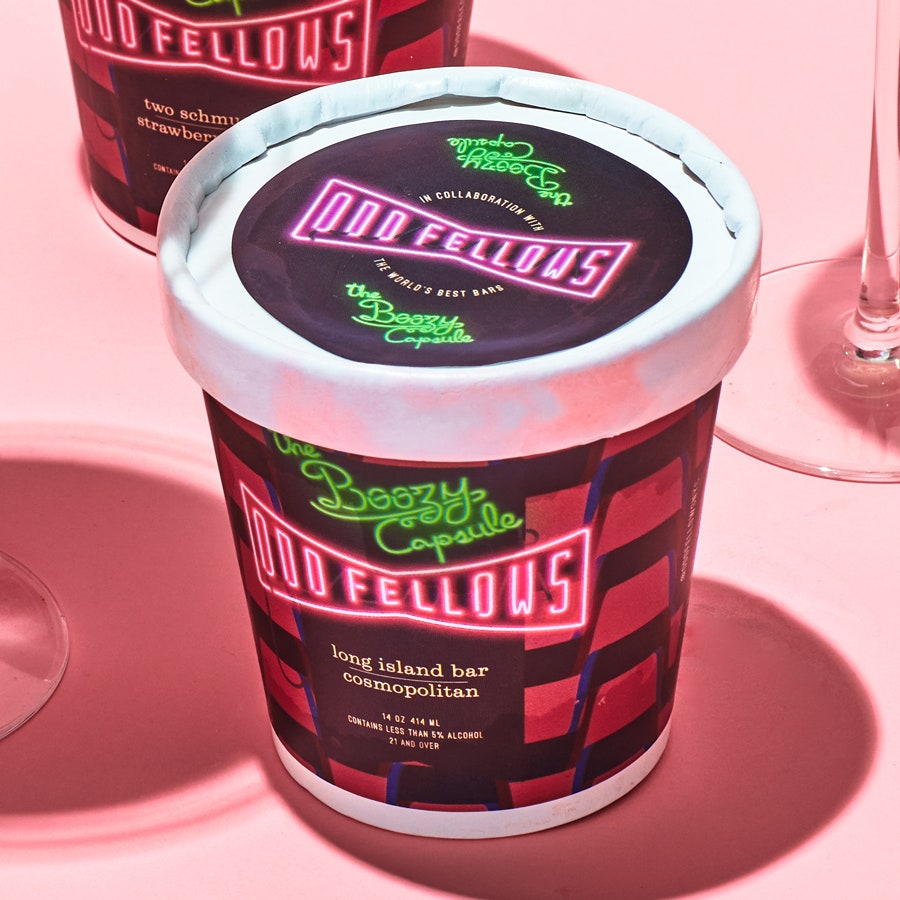